Lockdown Shmockdown! - Silver linings from a rather unique cycling year

Like many fellow cyclists I’m sure, I started planning out my cycling year back in December, plotting a few personal goals and a number of 2020 target events – from races to sportives to overseas adventures.

Most of these involved weekend fixtures quietly inked into the family kitchen calendar ready for the down the track  “I’m sure we discussed that” conversation, accepting that at least half of these ambitions may have to be sacrificed.

Looking back now, only one of those events was and is likely to be completed this year - a SERL Cat 3/4 Road Race in early March on the Biddenden course with heavy winter legs. At the time a painful “this is the last time, who am I trying to kid” exploit. Looking back now, something hugely missed even if I was dropped on the first lap and pulled on the last.

But what has taken its place has been an incredibly rewarding year of cycling thus far with still lots to go.

Through our Southborough Wheelers team effort in the British Cycling South East Zwift e-racing we became adept online gamers that our kids were proud of (earning exclusive avatar skins and virtual dream bikes but no V-Bucks.... yet). We became accustomed to sprinting out of the pen for 5 mins until you could breathe no more and then try and hang on to your drafting group for dear life to get you to the finish. And we learned how to use Mario Kart style power-ups to steal finish line victories (oh for those in real life).
We all got stronger and fitter but more importantly than that, we also stayed mentally fit, finding strong bonding and connection through an active messenger group that got many of us through a very tough time. Winning Series 2 as part of our 60 member male, female and junior team was icing on a very fine physically (but not socially) distant lockdown cake.

Outdoors we claimed the roads back from traffic and enjoyed the delights of riding both peacefully solo but also with our families on roads you might not have otherwise ventured.

As restrictions eased, it became time to seek out adventures, initially in pairs and then groups of six learning how to keep socially distant at lights and perhaps not quite hanging on to that wheel in front quite as tightly as Nairo.

For me, the lifting of restrictions enabled fellow Wheeler Craig Kingham and I to seize the bull by the horns and embark on the “South Downs Way in a Day” 100 mile gravel adventure from Winchester to Eastbourne. As many who have done the route will know, it is a incredibly rewarding but challenging test with contact points taking a pounding over flinty trails and fragile descents. But having come out of lockdown, 10 hours social time with a kindred spirit beyond my household did make the miles, gates and Marilyn hills roll by.

Working from home also gave back valuable commuter time and our 6am Cycling Club was more active than ever with old, regular and new faces alike. A good hour or so’s ride made a day of back to back Zoom meetings much more bearable with particular gratification as you looked those non-riders in the face on those early morning calls. As Tim Krabbe said in his seminal cycling book The Rider “The emptiness of those [non-racer] lives shock me”.

With no big get-aways planned, it was a also a chance to selfishly indulge in using some work holidays for long days in the saddle discovering new roads. I’d always had a 200 miler on my bucket list having come close a couple of times before. A solo effort through the Kent and East Sussex lanes was cut short in May when the legs just didn’t feel good beyond Rye.
A fantastic group ride with 5 fellow Wheelers around the Kent Coast in June brought us back to Tunbridge Wells just 10 miles shy. But the lure of a celebratory “socially distant” can of IPA (or three) on the St John’s  Church green prevented us going that extra 10 to tick over the double tonne. Yes The IPAs were with Fud and Muzzy (Scott and Mike having knocked off the 200 on their earlier detours home).

So in July, Fud, Muzzy and I decided to put our minds to it with a 200 mile door to door trip to Norwich via Muzzy’s Suffolk based parents for high tea. However, it wasn’t to be. Grim weather and a series of Miller punctures left us having to call it a day at 50 miles short with no chance to meet the Muzzy seniors. A personal lesson learned (at the expense of my fellow riders), was not to squeeze the last bit of life out of your lovely looking Vittoria Corsa tan walls on a 200 mile ride with some off-road bits within.
And then came August and weather to die for with work from home prompt clock-offs allowing for spontaneous evening sunset rides to wherever. Cancelled overseas holidays led to an impromptu family trip to the Isle of Wight and a chance to explore the chalk trails on the gravel bike. And as the month came to an end, Thursday evening SDW CycloCross training sessions started up again on locals trails for all ages, something I could rarely get home for in time when at the office. And the annual pilgrimage to Olympic Park for Ride London 100 became a virtual event with a virtual medal and a virtual sense of achievement.
But the 200 mile monkey and incomplete Norwich trip was still on my back. Could I really go through Winter having not finished what we started?
So with a relatively clear diary and a forecast scorcher, I took a September Monday off to embark on the trip solo. Leaving at 5am I just made the 6:40 Gravesend ferry for a glorious sunrise on The Thames and with it, ticked off almost all the climbing for the day. From The Thames on it was relatively flat and with a still wind, allowed me to keep in Zone 2 to 3 all day at a steady 27kmph average for just under 12 hours riding.

Some wonderful sights and countryside were taken in including riding through the fascinating Bata Factory estate in East Tilbury of which I have since learned much more about as a pioneering model factory town. What I hadn’t counted on quite so much was the post-covid traffic volumes meaning it wasn’t until 100 miles in and past Ipswich that I could really relax and fully enjoy the ride.

Growing up in Australia I tend to measure things in kilometres and psychologically I prefer the more rapid ticking over of kms to the drawn out miles. The totals also sound more impressive and of course it is a little bit Pro 😉. For me I have found that 40km is a really nice manageable sector mentally with each 10 representing a quarter of that sector which you can knock off quite quickly. 10km is a trip to the shops and back in my mind, 10miles is a focused Time Trial!

At every 40km I’d check my average pace against target pace for that sector and give myself a little fuelling treat before cracking on with the next.  All making the day go relatively quickly and keeping me on track for the 8pm train booked back to London from Norwich.

A beer and snack on Southwold beach was reward for passing our previous aborted effort. The snack included the discovery of Southwold Butter Buns, a heart attack and cholesterol killer to be avoided in any other circumstance but the perfect fuel three quarters into an endurance ride.

So I only had about 50 miles to go. However an extended chat with some curious locals “Say again, how far have you come?!”, meant I only had 3 hours to do it in.  This meant a full blown Mark Hirschi puppy paw effort to make my booked train with little time for wrong turns and no time for punctures of which I am pleased to say there were none for the whole trip thanks to the new GP 5000 tyres (danke schon Continental).

With minutes to spare I managed to get the photo proof of my goal outside Carrow Road and then roll to the far end of the Norwich platform to tick the Garmin just over 320km. Job done – or so I thought. Turns out that 320km isn’t quite 200 miles (198.84 to be precise). So there was no uploading of my the Strava route just yet. Instead it was feet up, mask on,  a couple of Suffolk’s finest Adnam ales from the train bar and drifting off with a strong sense of satisfaction and almost completion.  I woke at Liverpool St and just about remembered to turn the Garmin back on as I rode from to London Bridge for the final mile and half needed to tick over the 200 and that was that.

Of course we all know that one mad adventure just fuels another and seeing Wheeler messers Kuertz, Couchman, Greer and Evans knock off a cool 400km plus plus the other day hasn’t given Mrs. Miller any comfort that I won’t be planning something equally crazy next. So who’s in for an Audax or two?!

Lockdown Shmockdown! - Silver linings from a rather unique cycling year

Lockdown Shmockdown! By Simon Miller 22/09/20 (member of the Southborough & District Wheelers )    Like many fellow cyclists I’m sure, I... 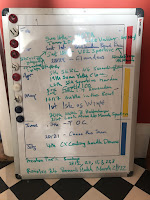